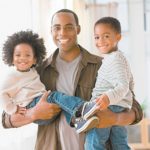 I have the mindset to succeed and continue to be a great father for both of my children.

Reggie Lee is matter-of-fact about his growing up years. “I grew up in an environment that was stressful from gang-banging and drug dealing. My mom and pops were on drugs. My father was a drug dealer and drug user and he was absent from my life a lot.”

Today, as Lee reflects on his current life, he tries to overcome barriers and help create a different reality for his two children – a son and a daughter. His life however, has at different times been impacted by incarceration, the challenge of making child support payments, struggles to make it in the workplace, relationships and other factors. His children have two different mothers; when his daughter (his older child) was young, he lost his job and got divorced from her mother. Later, he met his son’s father; now he takes care of his son. “I’m in his life as my father was not in mine,” he says.

He feels the impact of being incarcerated, which at one time separated Lee from his children. “When I was first incarcerated it drove a wedge between me and my daughter’s mom as well as my daughter because I wasn’t able to be physically see her and talk to her on the phone when I tried calling. For my son, being incarcerated made me realize that I need not be doing something that would hinder me from being there for him in the future.”

Like many who have been incarcerated, gaining a foothold in the workforce can be hugely difficult for Lee. As Lee says, “for the last seven years I’ve been applying for jobs and being turned down for jobs. I’ve been told that my background has hindered me.”

In 2011, Lee was placed on child support and ordered to pay on a monthly basis. Currently, he says that because he is taking care of his son, “child support should not be taking money from me. It’s very ineffective because I take care of my son and have to pay child support at the same time. I’m not getting any support from his mother.” The child support system, in fact, essentially pulls funds from fathers – funds that reimburse the state but don’t benefit the child.

Lee points to FFHC as a significant and positive influence on his life as a father. In particular, he praises the “peer-to-peer opportunities where I’m able to socialize and come together in a group of men that are dealing with or have dealt with a situation that is similar to mine.”

Being with FFHC, he says, “I feel as though I’m able to overcome a lot of barriers so I am able to take care of my family. I have the mindset to succeed and continue to be a great father for both of my children.”