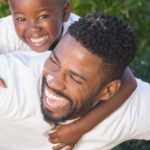 As statistics show, children without fathers in their home tend to go astray. It will affect all of us – even society as a whole.

Though he lived in a violent community while growing up, James Gilliam said his home was ”a pretty stable environment.” He also describes a life in which he became a father and was incarcerated – both before he turned 20.

Gilliam became a father at the age of 16. “I was excited because it was something new,” he says. “It was something different. It was something that I looked forward to doing successfully because my father wasn’t in my life. I told myself when I was a young boy that I would never abandon any of my children. When my baby was born, I was there every day, active in her life. I found out years later that she wasn’t mine. I was hurt but at the same time, I still see myself as a father to her.” Later, he had a son. “I’ve been in his life every day of his life,” he says.

At the age of 18, he was sent to prison. He regrets having been away from his daughter, but says the experience “made me stronger. It taught me how to turn a bad situation into a good one.” Though his path has been impacted by this experience, he says “I didn’t let that stop me.”

Gilliam, a construction worker who is currently unemployed, says his “credit has been shattered because of child support payments.” Like thousands of men in Illinois who pay child support, he contributes payments to a system that typically results in payments going to the state – not to the child (FFHC is working to change this situation). Gilliam says he has been persecuted by the state, and that his driver’s license has been suspended and passport revoked because of the state’s child support system. One result: he can’t work in many construction jobs because he doesn’t have a driver’s license. In addition, even though he is unemployed, he hasn’t been able to get a modification in his child care payments because mothers of his children haven’t appeared in court to approve the modification.

Regarding the state, Gilliam says “I don’t even know why they’re in my business anyway.” The way the system is set up, he says, “makes me feel like a second-rate dad.”

Gilliam, however, has found an outlet for his concerns through Fathers, Families and Healthy Communities. He calls it “a great organization” that is assisting fathers as they get “our rights together.” For him, that means advocating for a child support system that is more geared to children and families and enhancing his ability to see his children “when they want to see me.”

Despite the barriers he faces, Gilliam says he “sees a prosperous future….as long as he is able to lift this destructive force that the child support system has become in my life.” His observations – and hopes — are not just based on personal experience, but data. “As statistics show, children without fathers in their home tend to go astray,” he says. “It will affect all of us – even society as a whole.”